My greatest challenge with center pivot rice research in South Africa has been weed control. Since rice is not a normal crop in the country, none of the major rice herbicides such as propanil and quinclorac (Facet) are available here. We are utilizing multiple-crop herbicides already available here (ex. clomazone, pendathalin, 2,4-D) while working with chemical reps to get better herbicides for next year through legal channels. The chemicals that we are using now are effective for controlling weeds at higher rates but often cause significant crop injury. Shortly after I arrive here in early January, the rice was in mid-tiller growth stage with a medium infestation of Wandering Jew and wild watermelons. Later that week, 2,4-D was applied with a sprayer. Unfortunately, less than an hour after the applicator left the field a rain shower occurred. The rice tolerated the 2,4-D well but the many of the weeds recovered because the chemical was washed off. Over the next two weeks, it rained some almost every day. When the weather finally cleared to spray the rice again, the rice stem internodes were beginning to elongate indicating the beginning of reproduction growth stage. In the second application, the 2,4-D killed the weeds but also caused the rice leaves and stems to turn yellow. Hopefully, the plants will recover soon enough to produce normal panicles. 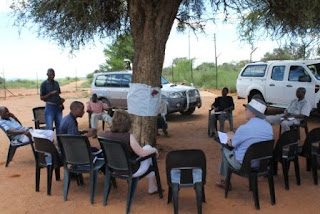 Last week, I was invited by the Limpopo Agriculture Department to make three on-farm visits. We went to the Greater Sekhukhume District, which is one of the poorest and driest areas of South Africa. Two of the three groups that I visited were working with partners in crop share rental arrangements similar to many farmers that I work with in the Bootheel of Missouri. In South Africa, often the land is owned by a tribe that divides the income between many families. One of the goals of schemes is to transfer modern farming skills from the partner to the landowners. If successful, over time, they would be able to profitably be able to manage their land on their own. Maize (corn) was the major crop being produced on the land with over-head sprinkler irrigation. The last group that we visited grow vegetables such as tomatoes. 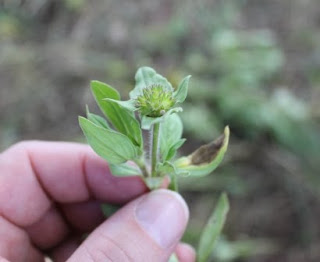 Their challenges were getting their produce to market, controlling a particular unknown weed, and a need for an additional tractor. 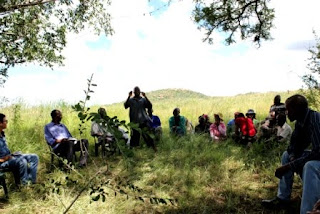 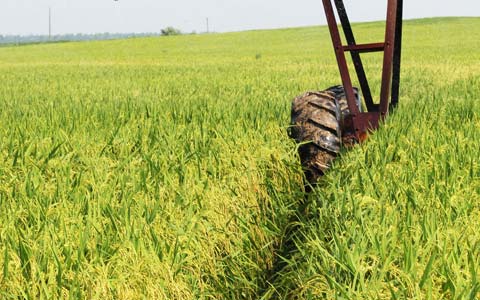 In 2010, we completed a three year study evaluating N fertilization of center pivot irrigated rice at the Delta Research Center in Portageville, Missouri. Rice farmers have asked what amount and frequency of irrigation water is needed to optimize rice yields under center pivot. Now, our focus is shifting from nitrogen to studying water management under different soil and climate conditions. Field experiments are being conducted in a Missouri and South Africa. Treatments include 2 day and 3 day irrigation intervals with 80%, 100%, and 120% of calculated evapotranspiration (ETc) from weather station data. Figure 1 shows the test layout in a pivot circle of a 70 acre field in South Africa. The north one-half is being used for the irrigation test using a blend of Nerica 4, 11, and 14 rice seed imported from Benin, Africa. 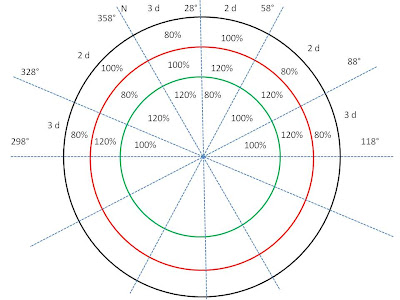 Figure 1. Irrigation plan for center pivot rice field in South Africa.
To apply two frequencies of irrigation, plans were entered into the irrigation system. Plan A is programmed for 2 day interval irrigation. Plan B is for 3 day irrigation intervals and Plan C is for days when both (2 and 3) day irrigation are scheduled. The plans below are show with hypothetical irrigation amounts (Figures 2 -4). The actual irrigation amounts are entered based on the previous 2 or 3 day ET calculations. After the plans are stored in the system only the last column (Rate) is modified based on weather. Treatment amount changes (80, 100, and 120% ET) are done in specific zones using a variable rate controller added to the center pivot. 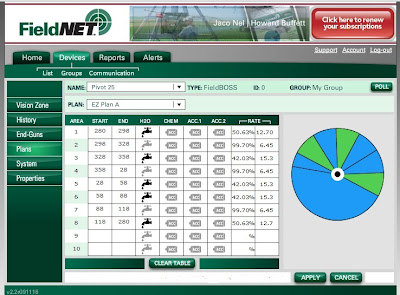 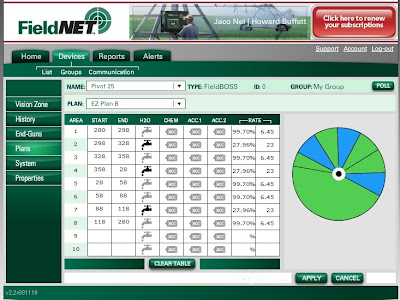 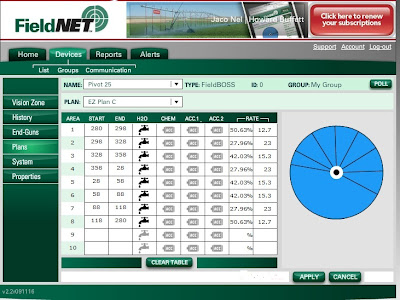 Figure 4. Plan C to apply both irrigation frequency treatments on the same day.
Below is an example calculation sheet for a 6 day cycle beginning with rainfall or irrigation on day 0. When a major rainfall occurs after the cycle begins, we start over again at day 0. To calculate crop ET at full canopy, we multiply weather station daily ET0 by 1.1. This value was then multiplied by 1.2 because the variable rate controller is designed apply 100% or less. In other words, the system is “tricked” by entering 120% ET as 100%, with the lower rates automatically applied in the correct zones. 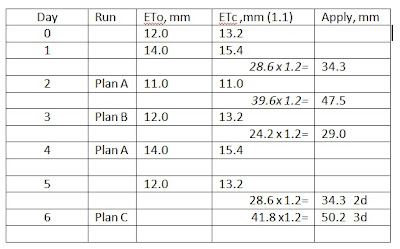 Figure 6. Calculation sheet for each plan using hypothetical ET values from the weather station.
We have been in a two week raining period. This is not good for evaluating irrigation, but it has given me time to set up the weather station and start finalizing the irrigation programs show above. Unfortunately, I have not been successful uplinking radio signals from the Campbell Scientific weather station in South Africa to Columbia, Missouri where it will be loaded on a page available to the public on the world wide web. All the equipment is in place and functioning except for a router port and irrigation controller problem. Hopefully, repairs will be made by service providers this week in time for the drier weather predicted by a local climatologist. 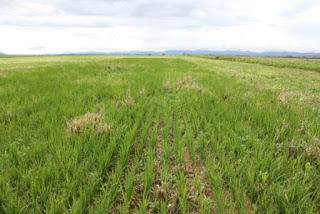 In the last week, rainfall has occurred almost every day. Rice likes water but we have not been able to spray the weeds with 2,4-D. Most of the rice plants are in the late tiller growth stage. On the south side of the pivot, I did not order enough Clincher herbicide to spray for volunteer corn in that area. Last Thursday, we used a tractor and mower to slash the corn and cut part of the upper leaves from the rice. We hope the rice will out-compete with the corn and shade it out. Rice in the irrigation frequency and amount test is in the late tiller growth stage. 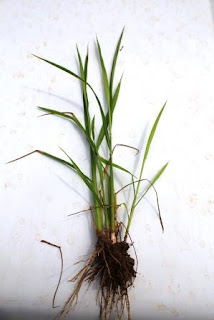 The photo on the right shows the small plot variety test under the pivot. We are evaluating seven varieties and two planting dates.
I am working with three other scientists from Missouri (MU and USDA-ARS) testing center pivot irrigated rice in Limpopo Province, South Africa. The objective is to grow rice in Africa with less water than conventional flood irrigation. Nerica 4, 11, and 14 rice seed was purchased for the experiment from AfricaRice Center in Benin. Seeds were treated with fungicides and insecticide (Celest/Regent/Icon) before planting on November 2. An irrigation study (frequency and amount) is being conducted on 36 acres under a South Africa Zimmatic center pivot. A variable rate system was installed on the system which allows us to program application treatments on a large scale with three replications.
Alternating low rate applications of Command and Prowl were applied early in the season for residual grass and broad leaf control. The study is being conducted in a field which was planted in Roundup Ready corn in 2009. Unfortunately, the previous farmer did a poor job of harvesting the grain and volunteer corn is the most problem weed in the rice. In mid-December, Clincher herbicide was sprayed to control the corn. Most of the corn is dying and we will be spraying 2,4-D this week to kill wild watermelon and Wandering Jew (Tradescantia fluminersis) weeds.
This week, I have been working on completing the wiring and setup of a Campbell Scientific weather station. This weather data (temperature, wind, radiation, and humidity) will be used to calculate daily soil and plant evapotranspiration (ET). This will be used to determine the amount of irrigation water to apply in the study. In another part of the field under the same pivot, we are conducting a small variety test with seven rice cultivars from Brazil, Cambodia, and West Africa.
South Africa has very distinct wet and dry seasons. When I visited the farm in early August it was dry and cool. January is mid-summer here. In the Limpopo Province this is the rainy season. It has rained every day this week. Usually lightning has accompanied the rain and caused electric power and internet interruptions.