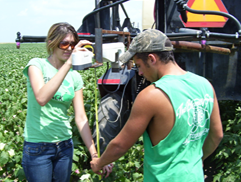 A simple method is needed to aid farmers with midseason N decisions in rice in the Mississippi River Delta region. Experiments were conducted from 2004 to 2006 at Glennonville and Portageville, Missouri to evaluate visual and digital image measurements at internode elongation for predicting rice yield response to midseason N applications.

Example images (left to right- low preflood N to high preflood N) collected at internode elongation with a digital camera from 80cm X 115cm areas in rice plots. Values in the lower right corner of photos were the proportion of green pixels in images counted with Sigma Scan software.

A yardstick was floated on floodwater between two center drill rows and the numbers visible were counted. Inch digits on the yardstick were approximately 2.0 mm tall. Standing between adjacent rows and leaning over the sampling rows, we counted the inch numbers showing on the yardstick (not hidden by rice leaves) out of 36 numbers possible. When a rice leaf obstructed the view of one digit in a two-digit number to the point that it the whole number was not recognized, we did not count that number. The person taking the measurements always kept both eyes open during the readings.

Conclusion. No yield response was produced from midseason N when fewer than 13 numbers were showing on a yardstick floating between drill rows or more than 64 % of the pixels in digital images of plots were green.