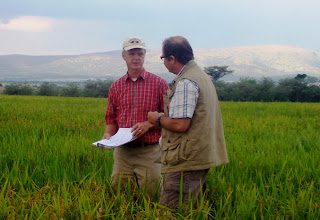 I returned to the United States on March 1. Jim Heiser, my research associate, is at the research farm managing the final irrigations and will be helping with harvest and grain storage. Most of the Nerica 4 rice panicles are mature now but the Nerica 11 and 14 still have a couple of weeks before the grain is mature. We are already making plans for the next growing season. In November 2011, we will plant one half of the irrigation experiment in Supra Rice from Zambia and the other half in Nerica 4 rice. In small plots, we will also plant about 25 conventional and 50 hybrid lines from Kenya.

Over the winter months, we plan to make three improvements to the center pivot equipment. (1) This year the rice plants were taller and greener close to the pivot point and became yellow and small at the edges of the center. To improve mixing of the N fertigation solution with the irrigation water, we will move the injection port down the supply line before the red filter and use an insert diffuser in the port. 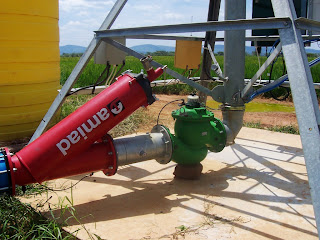 (2) The EZ plan was programmed to leave a 5 degree dry area for the entrance road from the east. This was done to conserve water and keep the road from staying muddy. It worked twice but on the third irrigation, the system watered the road then turned off in the rice. The degrees on the Field Boss were incorrect. Since the system already has a GPS receiver for the precision system, I suggest that the GPS also be used to track the degree settings for Field Boss instead of the current angle setup. 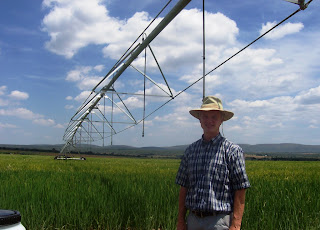 (3) Finally, work is need on communication between Field Boss and the radio transmitter. Sometimes when the system is moving and applying water, I need to stop it because of rain. Pusing the stop button halts the pivot from walking but the pump continues running down the hill at the reservoir. To get the pump to stop, I open the radio box and click an orange lever. This stops the pump, but is not how the system should function.