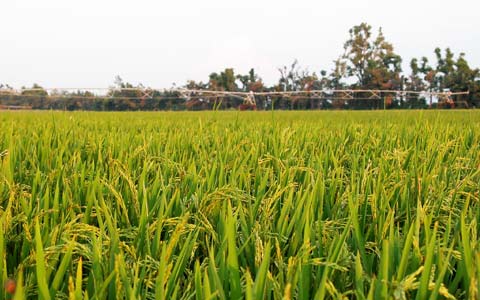 Our first rice crop in South Africa has really had its “ups and downs”. The photo below was taken this morning in one of the healthiest parts of the field. Rice in the north side of the field is in the late boot or early flower growth stage. Two weeks ago, by accident, we “hammered” the rice with 2,4-D to prevent wild watermellon and Wandering Jew weeds from taking over. Normally, 2,4-D injury causes the rice flag leaf to temporarily turn down at a 90 degree angle instead of standing straight up as normal, but oddly this did not happen on the Nerica rice. 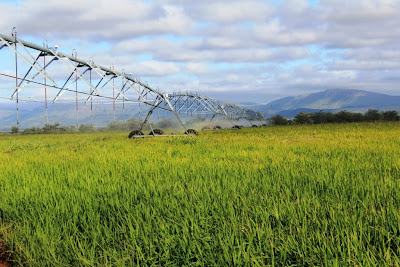 Instead, the herbicide made most of the plants turn a yellow color which caused me to question if the problem might, in fact, be nitrogen or sulfur deficiency. We pulled tissue samples for testing from green and yellow areas to determine N and S content. I am still waiting for the results from the South Africa lab. In the meantime, I began to second guess the wisdom of my request to make the 2,4-D application. But, alas with more time to recover, I think it might have been the right choice. There are still rice plants in the field on south side of the that we slashed that are sick (we did not order enough Clincher to control the volunteer corn). But in the non-slashed areas on the north side, the rice is beginning to look almost normal again and most of the broadleaf weeds were controlled. If nothing else, it will help reduce the weed seed bank for next year’s crop. Unfortunately, now we have a new problem. Actually it is a old problem that I did not take serious enough at the time.
In mid-December, Matt Rhine scouted the field 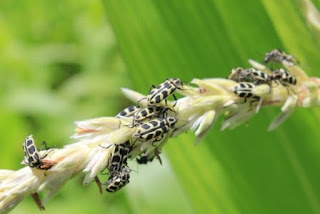 and found black and yellow beetles feeding on the tassels of the volunteer maize (corn). When I arrived on January 1, the beetles were eating the corn pollen but did not show any interest in the rice plants. See corn photo on right. I sent copies of my photos to Dr. Kelly Tindall, entomologist at the University of Missouri-Delta Center, for identification. Without having an actual specimen to observe, she could not give an absolute ID but thought it was Diabrotica sp. (same genus as corn rootworm). This may be the adult stage of the worm that lays eggs in the soil and attacks corn roots the following year. No one knows what the impact of the soil larvae of the beetle will have on next year’s rice because their behavior is very species dependent. They may attack the rice seedling roots just like they would young corn roots. Or they may totally ignore the rice. Kelly also said that, in the US, there are species that will only lay eggs in corn fields and they overwinter as eggs and that is why a corn-soybean rotation is successful. Soybeans are not a host for the pest. A good non-grass crop, such as cow peas, to rotate with pivot rice would be a big help for reducing insect and diseases in the rice. In hind-sight, for this rice crop, I should have sprayed the with insecticide in early January. When most of the corn died from Clincher or from slashing with a mower, I forgot about the beetles and focused on other problems.

Now that the rice is starting to flower, the beetles are back in very high numbers feeding on the pollen from the rice heads. On Tuesday, four days ago (2/1) we sprayed lambda-cyhalothrin (150 ml/ha) to control the beetles. For prevention of diseases such as blast, on Thursday (2/3) we sprayed pyraclostrobin (800 ml/ha). My chemical supplier warned me that lambda-cyhalothrin may not do a complete job. He was correct. Although it significantly reduced the numbers, there are “hot spots” in the field where beetles are still alive and feeding on the rice heads. We special ordered carbaryl insecticide, a more potent “beetle killer”, which is scheduled for delivery on Monday (2/7). We will spray carbaryl at rate of 3 liters /ha.
Fortunately most of the rice plants are in the late boot stage, just now getting ready to flower. The photo below shows panicles from two plants. The one on the bottom flowered early and probably was attacked by beetles. The panicle on the top, is just starting to flower. Hopefully, we can still protect it with carbaryl insecticide. If anyone sees this photo below and recognizes the symptoms of the brown panicle as something other than indirect effects of beetle attack, please contact me. 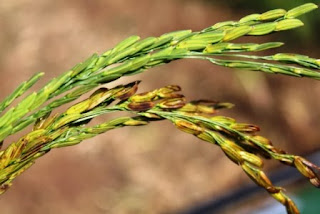 Growing a new crop in an area often brings unexpected problems. That’s why they call it research. I hope my tardy reaction to control the beetles will help a farmer in the future avoid my mistake.